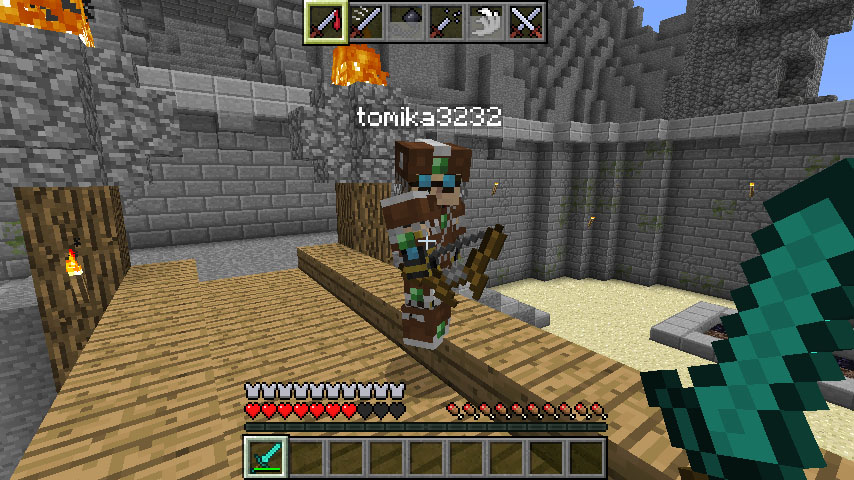 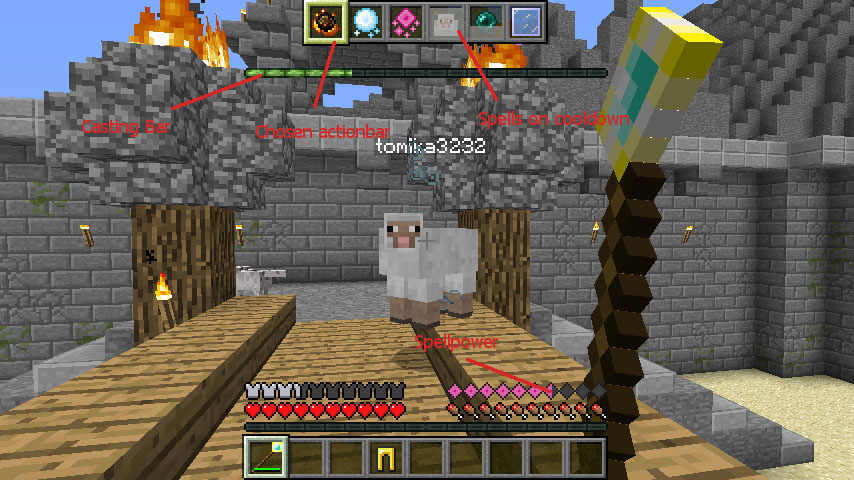 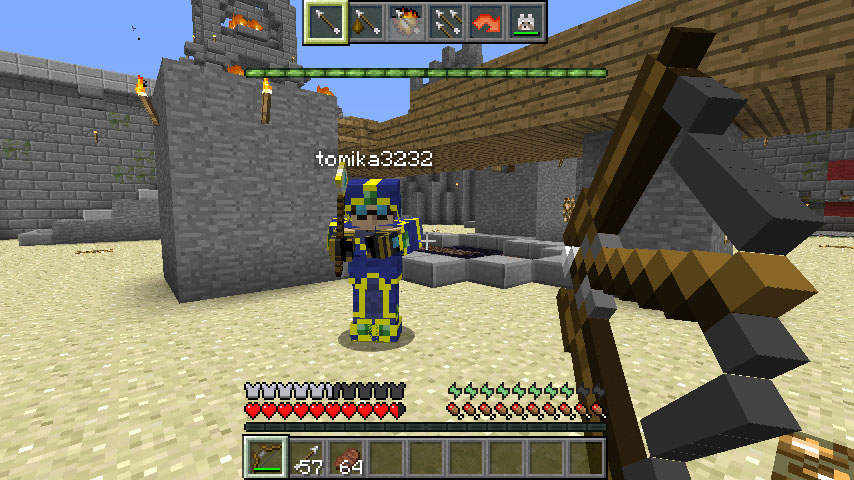 A weak strike that forces enemy mob to attack the warrior. (Taunts.)

A weak strike that slows down the enemy for 3 seconds.

Pummel the target, interrupting spellcasting/weapon using and preventing the target from any spell/ability being used up for 2 seconds, and also gives 5 seconds of weakness for the target.

Charges the warrior forward by giving them a speed burst.

Reduces melee/projectile damage dealt on the warrior while being used. (Same as blocking with vanilla swords.)

Warrior weapons are Broadswords. They are made of the regular materials (Wood, Stone, Iron, Gold, Diamond), but they are more expensive. Warriors abilities are stronger when used with a better Broadsword.Also the better quality Broadsword the Warrior has, the more abilities it gets access to use.

Warrior armor gear tiers are the original Minecraft armors with one addition. They are: Chainmail, Iron and Diamond, this means crafting chainmail armor gets enabled by this mod.Warriors do not get any class bonus attribute from armor (,however other classes do), armor only provides damage reduction.

Mage
Mage spells can be accessed by right-clicking Staves (below).Mage class attribute: Spellpower (Spells hit bigger if the mage has more of this. Can be earned by wearing spellcloth gear.)

Hurls a fireball that causes 1 + Spellpower / 3 (1-6) magical damage (that bypasses armor) and sets the target on fire for 2 seconds.

Launches a bolt of frost, causes Spellpower / 3 (0-6) magical damage (that bypasses armor) and slows down the target for 4 seconds.

Transforms the enemy target into a sheep. (The effect will last only 7 seconds, preventing the target from any attack or spell casting/ability using, also regenerates health very quickly and slows down the target if it is a player.) Can be used only against players or humanoid mobs.

Teleports the caster 20 blocks forward, unless something is in the way. Also provides resistance for 3 seconds, after the teleportation (which is more effective if the mage has more spellpower).

Summons unbreakable blocks of ice instantly to surround the caster and incarcerate him/her for 7 seconds to prevent any connection with the outer world.

There are 3 Staves for Mages to use.The better quality Staff the Mages has, the more spells it gets access to cast.

Mage gears are 3 cloth based armorset, they can be crafted out of wool, gold and emeralds.Higher tiers of these clothes give more spellpower and armor.

Shoots a single arrows, which deals more damage if the bow is drawn back more.

Instantly shoots an arrow which poisons the target dealing the damage of a normal arrow hit, plus the damage of the poison over time. The poison effect lasts 1 second + agility * 0.6 seconds.

Shoots an explosive arrow. (The explosion will be bigger as the hunter has more agility.)

Shoots 3 arrows at the same time in horizontaly spreaded directions.

The hunter attempts to disengage from combat, leaping backwards. Can only be used while standing on the ground. (The jump will be bigger as the hunter has more agility. Zero agility means no jump.)

Hunter weapons are Long Bows. Long Bows have a long drawback time, but it can be reduced by having more agility.The better quality Long Bow the Hunter has, the more abilities it gets access to use.

Hunter gear tiers are 3 leather based armorsets, they can be crafted out of leather, chain, iron and emeralds.Higher tiers of these leather pieces provide more agility and armor. (The first tier of hunter set is the leather set from vanilla Minecraft.)

Battle Classes is a newly started combat oriented modification, providing MMORPG classes with their abilites in an improved complexity of combat system. Each class has its own weapon type (for example.: Staves for Mages, Broadswords for Warriors etc…) that allows the players to use their abilities and spells (detailed description below), and also 3 tiers of armor sets, those grant bonus attributes (such as: spellpower, agility etc…) to make these spells more powerful.

How to pick your first class? To pick a class you have to interact with a custom weapon (Broadsword/Long Bow/Staff). Once you have a weapon of a class, you need to Right-Click on the weapon and the it will immediatly fill the actionbar on the top of the screen with spells/abilities of that class. You can change your class at any point of the game by Right-Clicking on a weapon of an other class.(Note: Choosing a class gives global cooldown for 8 seconds.)

Controls! To control your spell actionbar, you can use the same controls as the item action (mousewheel or number keys), but first you need to select that. Press button &quot;b&quot; (configurable) to toggle action bar selection. The slidebar of the selected actionbar will turn into yellow so you can see which actionbar are you controlling.(Alternatively you can use key &quot;g&quot; and &quot;h&quot; to directly step forward or backwards on the upper actionbar, even without selecting it.)

Casting a spell/Using an ability! Once you have picked a class and chosen a spell, you only need to Right-Click on the weapon of the class and hold it down (like a bow). Some of the spells/abilities are instant some of them have a longer cast time!

Armors and Weapons. Each class has a specific armor required. You can wear anything you want, but your spells/abilities require a special attribute to make your spells/abilities more powerful, that is different for all of the classes. (For which class, what kind of gear requires, see the detailed class descriptions below.) As you may have read before, every class has its own weapon type, but there are more weapons from each type.
Important: The better weapon you are using, the more spells/abilities of your class you can use!

Cooldowns. Some of the spells/abilities need a certain amount of time to be able to use again. This is called cooldown. (For further information about cooldowns see the detailed descriptions of the classes below.)
(Note: Choosing/changing to a class gives 8 seconds of cooldown for your full actionbar.)

Role of original combat items. You can still use vanilla weapons (swords and the bow) as they not being modified so they are not weapons of any classes. You can use them anytime you want without changing your class.