Gravity Bomb:
If there is air below it, it falls until it hits a block, and then explodes. Craft 3 of them with 3 TNT along the top, one blaze powder in the middle and 3 iron ingots on next to the blaze powder.

Excavator Bomb:
Functions much like a gravity bomb, except after exploding continues falling and exploding for a set lifespan. To craft, line up 3 gravity bombs vertically, put iron on the middle sides, and put iron pickaxes on the bottom sides.

Place a tool (or other non-stacking item) into the slot marked with a pickaxe outline. To put something in, put it in the slot with the down arrow and the tool below it. To take it out, put the tool in the slot below the up arrow. Note: Tools with gunpowder explode when used, and tools with a fermented spider eye poison the player who uses them.
Craft it by placing a lens, workbench, and chest along the top, 3 iron blocks along the middle and planks in the bottom corners.

Accelerator:
Entities on top of this (players, mobs, XP, items, etc.) are accelerated in the direction of their current motion. Not legitimately obtainable.

Launcher:
Entities INSIDE this are accelerated up. Not legitimately obtainable.

Time bomb:
A time bomb. (What else?) The red bar is the fuse (set in the mod config). When the fuse runs out, it creates vanilla primed TNT at its location. Craft it from one clock and one TNT.

Deforestator:
Burns logs, leaves, vines and tall grass more or less as fast as the server can tick. To craft, put a flint and steel in the middle, blaze powders at the corners and saplings at the sides.

Miner’s Lighter:
Instantly burns gravel and lava. For world safety reasons, does not work in the Nether as of v0.7. Craft like a deforestator, except substitute gravel for the saplings.

Temporal Dislocator:
This is for anyone who has ever been stuck waiting to craft something, having all the parts needed except for one little thing smelting in the furnace. When you sneak and right click a block, it causes the future version of the block to be pulled back in time to the present.
NOTE: I haven’t tested it on all mod blocks. Use at your own risk. If you wonder if something is safe, try it in a test world first. In my test it worked just fine on HV solar panels as found in Tekkit Lite, dumping hundreds of thousands of EU into an MFSU instantly. To craft, surround an iron ingot with clocks.

Spy Lens:
A piece of precision optics used to make the inserter and defuser. It is made by crafting 4 iron around a glass block.

Defuser:
Instantly removes blocks listed in the mod’s config. (Put in all the explosives in your pack or it won’t work on the ones you miss. It only works on blocks so far.) It is the only way to neutralize fork bombs. In doing so you need to sneak, upon pain of having 6 times the problem on your hands. Nothing, shears, lens,
nothing, stick, shears,
stick, nothing, nothing.

Carry one on SMP. You will regret it if you don’t.

Build tool:
This is a time- and space-saving utility item. It is effective against blocks as a diamond pickaxe. Load things into it with the inserter, and when you right-click with this tool it has the same effect as right-clicking with the thing you put in. (Warranty void if used to launch projectiles.) It also automatically refills itself from your inventory. It is not exempt from exploding or poisoning its user as any other tool does, depending on what you put in it with the inserter. It is made with a diamond pick in the bottom left, piston in the middle and chest in the top right.

Invenswappers:
These two closely related blocks move your inventory quickly without the hassle of opening GUIs and shift-clicking or related shortcuts. When placing them, make sure that you can walk on top of them and that directly above is air. To use them, walk on top of them and sneak for a moment. On the blocks, the red arrow in the arrow pair is the one that marks the flow of items. Right click them to see what is inside them. They are made like so:
ICI
LPL
LHL
where I is an iron pressure plate, C is a chest or hopper, L is a lapis block, and H is a hopper or chest.
You can also convert between in and out invenswappers by putting them in any crafting table.

Fire extinguisher:
Extinguishes blazes of all types, from the hostile mob (2 hits to kill) to fireplace building mistakes, prize sheep burning and even deforestator or miner’s lighter fire if you’re really fast about it. Made with one iron ingot on the top center, two water buckets below, and rose red in the four slots beside the water.

Tiny mods:
Flower fix:Allows increasing the generation of vanilla flowers. Someone asked me for it because with many mod flowers taking over bonemeal flower spawns, roses and dandelions were almost unobtainable. The weight added to each flower is configurable. By default, roses are weighted at 10 and dandelions 20. This can only increase weights, not decrease them!

Allows any size and shape of portal to be created. If you want a portal with 1-block-wide parts it is highly recommended to do it in the YZ plane (the one where the X value is constant). 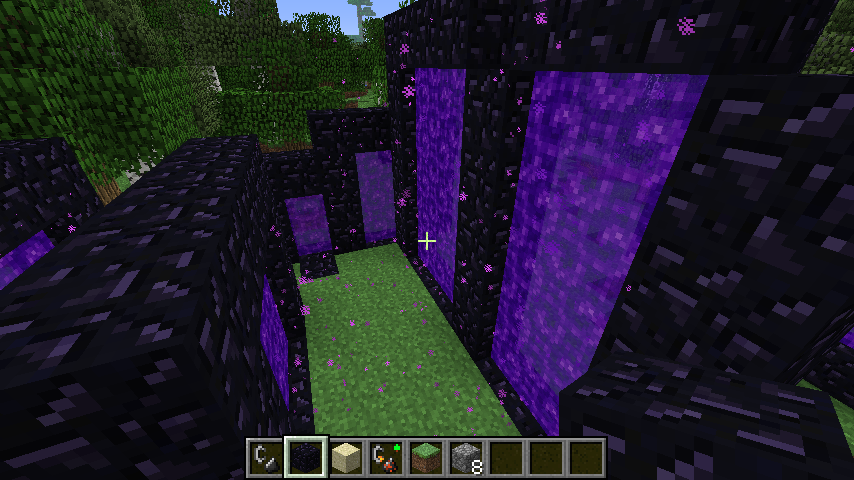 CovertJaguar’s mod, Railcraft, removes the vanilla recipes to maintain its own cohesive tech tree, and in the process makes rails far more expensive (coke oven, rolling machine, BC power system) and in my experience less likely to be actually used at all. Apparently the Railcraft config option to allow vanilla recipes got lost somewhere, so I made this mod to load after Railcraft and register the vanilla rail recipes as its own. There is really nothing to show here since it’s the vanilla recipes.

Gizmos is with many things a destructive mod, but has some other useful stuff. In ye olden days, this would mean that a sensible admin wanting a peaceful server would remove the entire mod. However, Gizmos has an item banning system that removes only parts of the mod you don’t want. It is probably impossible to get banned Gizmos stuff on SMP, even with all the hacks in the world or access to /give or creative.

As of version 1.0, the system has undergone a complete rewrite to allow more extensible and longer tech trees. The method of banning items has also changed: Instead of toggling booleans in the config, one puts the names of unwanted modules (see ModuleNameList.txt inside the mod for the list of names) into the banned items list in the config.

Gizmos is with many things a destructive mod, but has some other useful stuff. Time Travel, Explosions, Spy Tools, Fire and more