A stargate is a transportation device developed by a long-vanished alien civilisation known as the Ancients. Their vast network of stargates was later taken over by the Goa’uld, a race of nasty sentient parasites. The Goa’uld brought stargate technology to Earth, enslaved the ancient Egyptians, and then largely lost interest in us. The only traces remaining of them on Earth now are their influence on Egyptian culture and a few pieces of mysterious technology.

How the stargate works is not known in detail, but it appears to create a space-time wormhole linking it to another stargate in a distant location. Once the wormhole is established, a person can step into one stargate and be instantly transported to the other.

A network of stargates is similar in some ways to a telephone network. Each stargate has an address, and you establish a connection by dialling the address of the stargate you want to connect to. 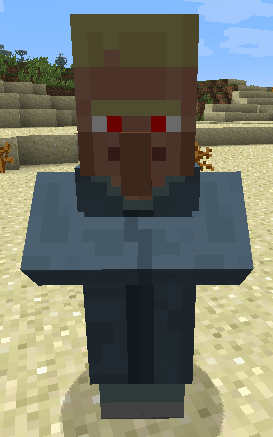 The Tok’ra are of the same species as the Goa’uld, but they have a completely different culture. They only take willing hosts, and are generally friendly and helpful. They have an extensive knowledge of Goa’uld technology, and will be very happy to sell you the crystals you need to build those elusive stargate components.

To create a stargate, you need to build a 5×5 ring composed of a Stargate Base Block, eight Stargate Ring Blocks and seven Stargate Chevron Blocks, arranged in the patter shown here. The blue circle on the base block should face the direction you want the front of the stargate to be in; the direction of the other blocks doesn’t matter.

Once the last block is placed, the blocks of the ring will merge together and form a Stargate.

To use your stargate, you will need a Stargate Controller, also known as a DHD or Dial Home Device. The controller should be placed facing the front of the stargate, within 5 blocks of the bottom centre of the ring, either on the same level or one block above or below. 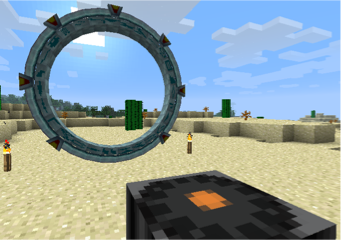 An address can be entered either by clicking buttons on the circular grid or typing letters on the keyboard. The Backspace or Delete key can be used to erase characters. Once a complete address is entered, press the Enter key or click on the orange button. If the address is valid, the orange button will light up and the stargate will begin dialling the address.

Once a stargate connection is made, it can be disconnected by pressing the orange button again.

A stargate address is made up of seven characters, chosen from an alphabet of 26 symbols. For convenience, these symbols have been somewhat arbitrarily mapped to letters, so that you can type them on your keyboard.

The address encodes a dimension and a spatial location within that dimension. The location has chunk-level resolution, meaning that you can only have one useful stargate in each chunk (16×16 area). If you dial the address of a chunk containing more than one stargate, one of them will be connected to arbitrarily.

To find out the address of a stargate, right-click somewhere on the ring. This is temporary; finding out stargate addresses may be more complicated in a future version.

Before your stargate will do anything, it needs to be supplied with fuel. Stargates run on naquadah, a dense mineral of unknown composition that is a very rich source of energy1. Naquadah is obtained from naquadah ore, which is most commonly found underneath lava, although it occasionally appears in other places. Due to its very high density, a diamond pickaxe is required to mine naquadah.

To fuel a stargate, open its GUI by right-clicking somewhere on the stargate ring (not the controller) and place naquadah in the fuel slots at the right. The black rectangle is a fuel buffer that will be automatically refilled as necessary from the fuel slots.

Establishing a connection requires a fairly large burst of energy, and energy is also used as long as the connection remains open. If you don’t keep the stargate open for longer than necessary, one piece of naquadah is good for about 20 journeys. If you leave the gate open, it closes automatically after 5 minutes.

Fuel is only used by the stargate initiating the connection. No fuel is required to receive a connection or maintain a received connection.

Future versions may provide alternative ways of both powering and controlling stargates.

The opening transient of a stargate event horizon is extremely dangerous. It is recommended to maintain a distance of at least 5 blocks from the front of the stargate until the event horizon stabilises.

Breaking a stargate while a connection is open is not recommended. The event horizon contains a large amount of potential energy; if the stargate mechanism is disrupted, this energy will be explosively released. 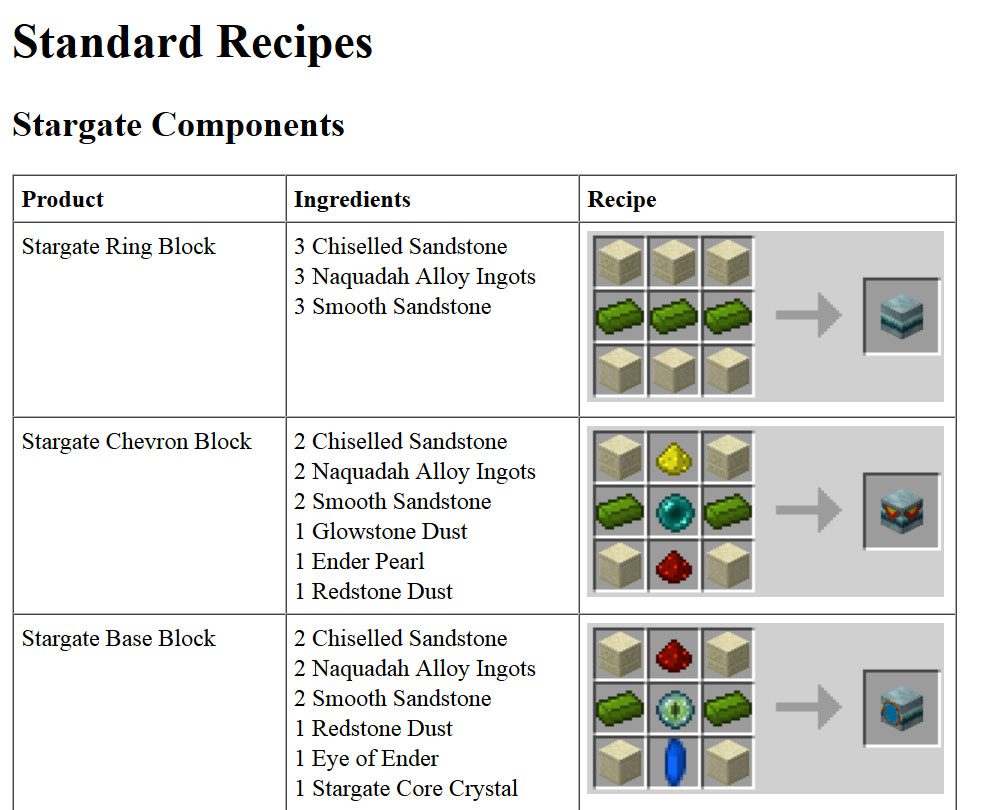 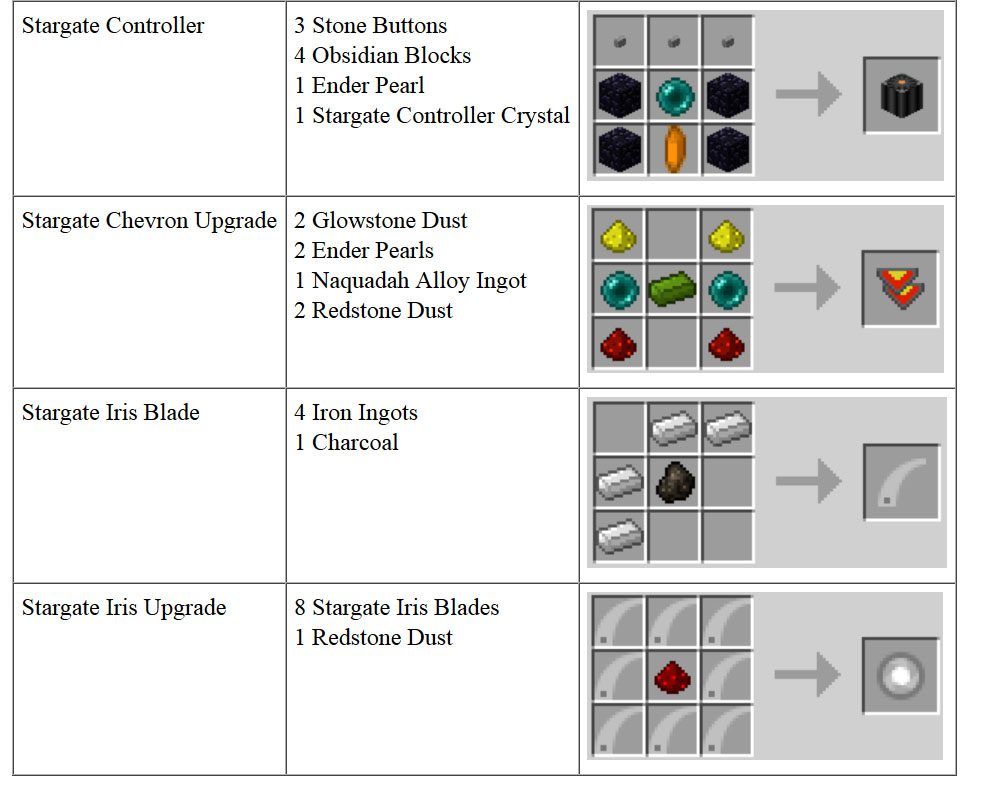 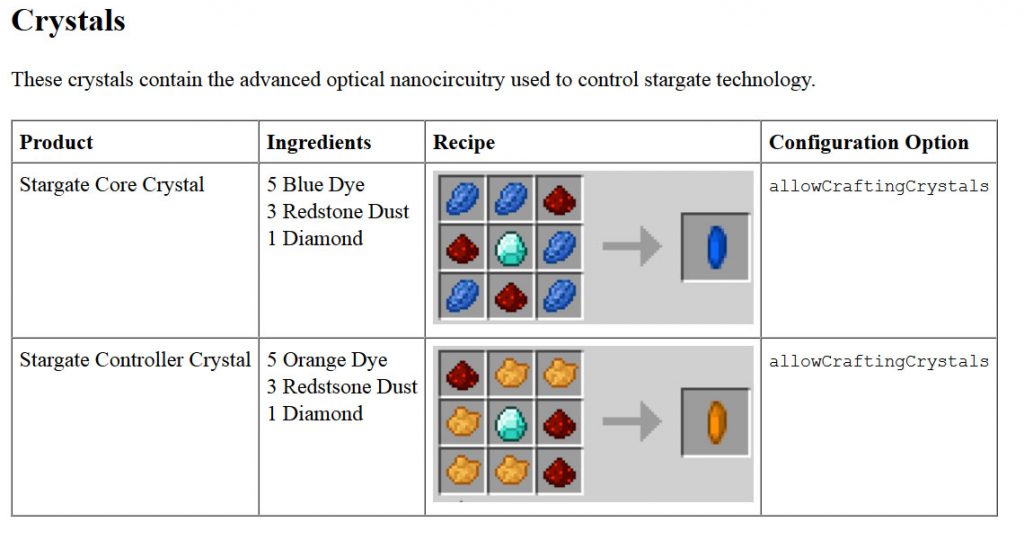 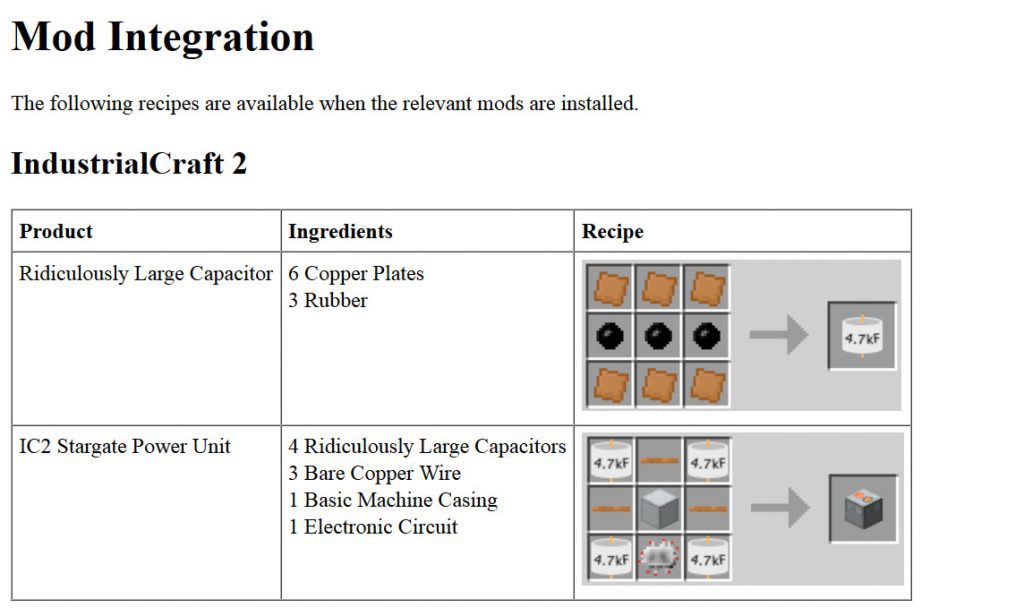 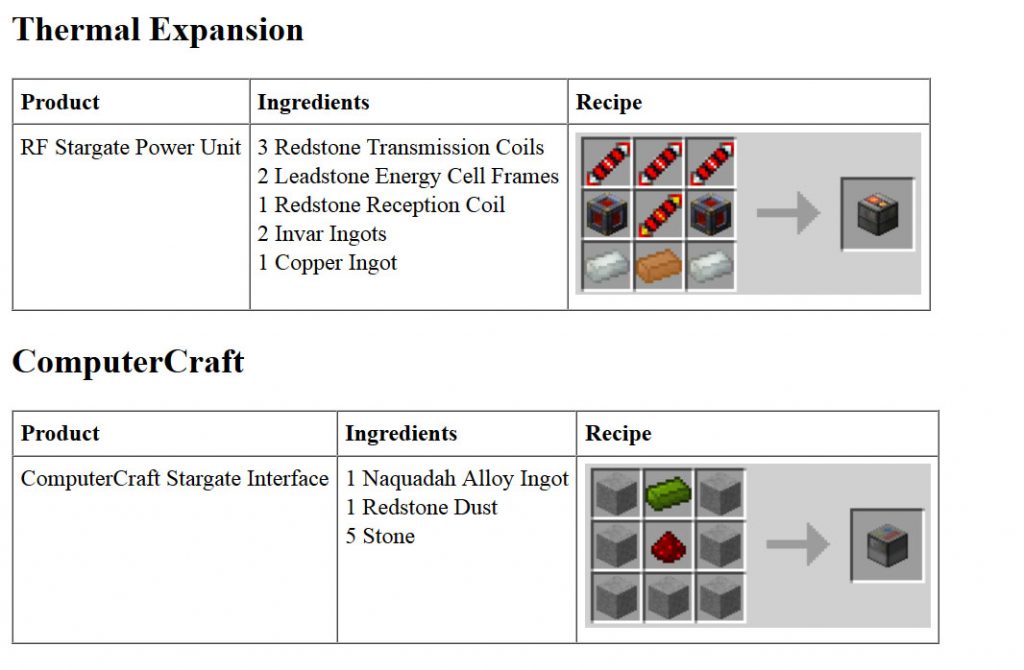 This mod provides some technology based loosely on the Stargate SG-1 universe. 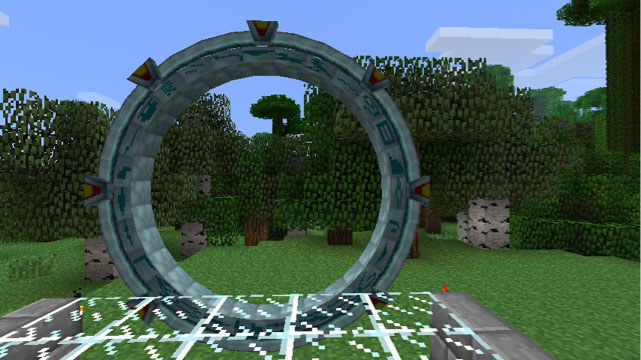