Playing Minecraft is awesome, nobody will argue with that, but playing the same old Minecraft over and over again, makes the game lose the fun which is pity full. But heres a question, what is the thing you do most in Minecraft? Correct! The three things you do most of the time is: Mining, gathering wood and farming. So let’s say you are farming, after a period of time, you get bored and annoyed that there aren’t any other plantations.
But you are wrong! Pam’s Melon Spawn Mod adds watermelons to the game!!! How awesome are watermelons to eat. Now Melons will spawn in any biome and from just s like pumpkins do. You will be able to gather seeds from them and gather the food by growing it on your farm. Watermelons are great and you can’t argue with that. Adding watermelons to Minecraft is a thing that had to be done sooner or later.
Fellow Farmers will enjoy playing ths  mod as it increase their crops and gives a vriety to their patches. 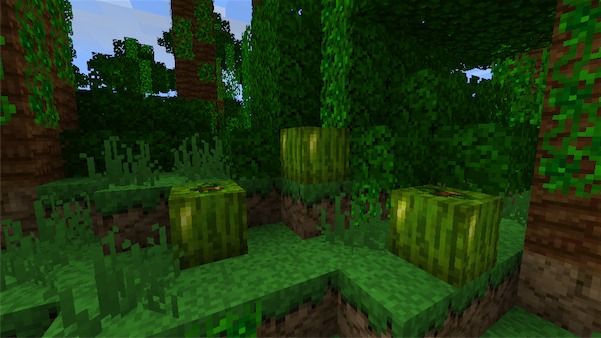 Melon spawn mod  is classed as a mini mod, its features are: