Cannibalism Mod enables players to eat themselves or others when they need to survive, which is quite crucial but necesary if you need to do it.

If you need to eat yourself or even others to survive… Would you do it? This mod adds in the ability for players to use themselves as a source of food when the time calls for it.

Knifes: Shift-right clicking them will cause the user to take 2.5 – 3 hearts of damage and drop one piece of their flesh. Additionally, right-clicking on other mobs that would normally drops food (including villagers) will cause them to drop their respective meat and take damage according to this scale:

Chickens: Set to kill the chicken as they drop their bodies as food.

Wendigo: Summoned (Once for each player) when someone had became too much of a cannibal. It’s a powerful creature with 50 hearts and high knockback resistance. It will deal 5 hearts of damage to the player regardless of armor and potion effects along with knocking them up into the air. The mob is disabled by default.

Wendigo Level Mechanic: (Only enabled if the Wendigo is enabled)

This represents how far down the player has gone in term of cannibalism, and will reset when it reaches a high enough point along with causing a Wendigo to spawn near the player proximity (~30-50 blocks). Dying will also cause the reset to happen, but with no Wendigo spawns. Eating Player Flesh or Villager Flesh will cause the player’s level to increase.

Depending on how high a player’s level is, they will receive a Speed I/II, Strength III, and/or resistance II buff at the cost of a higher hunger drain depending on how far down they’ve gone. When the player reaches the halfway point to having a Wendigo spawn, they will get a temporary dose of Nausea and Blinding.

By default, the player will use its own “hurt” sound when the knife is used. This can be changed to use the ghast’s sceam sound in the mod’s config file or via Forge’s config GUI found in the mods list tab. You can also change the sound’s pitch. 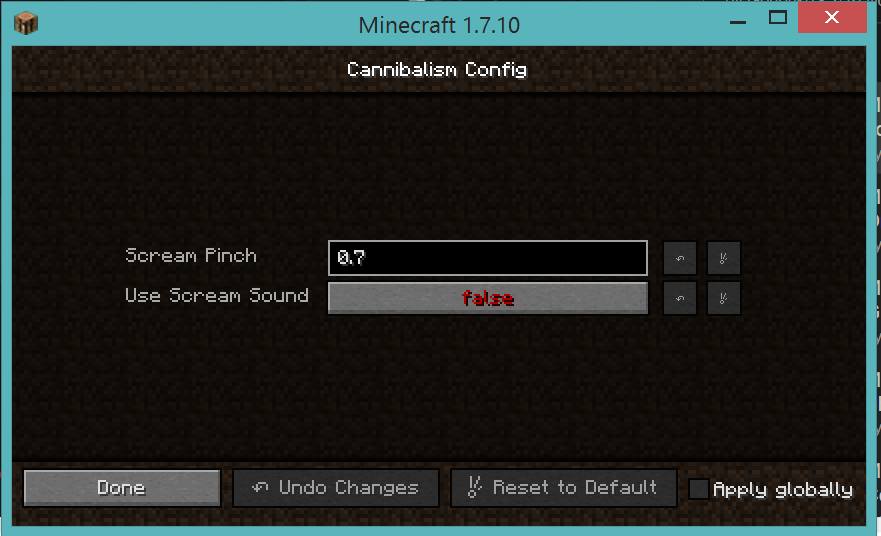