Redpower 2… An absolute legend in the history of minecraft mods made by the overlord Eloraam. It started with a bang and has been increasing rapidly ever since. Redpower 2 will please your smart side, your aesthetic side, and your adventuring side. Redpower 2 has four main aspects to it. World generation, machinery, redstone and building. I”ll start with my favourite part… redstone.

Redstoners out there; if you haven’t tried this mod out you better try it soon. You won’t know what you would’ve done without it. It adds many handy features to do with redstone such as building those compicated logic gates in a simple crafting recipe. Yes, with Redpower 2 a logic gate is a single, placable block. Yo0u make them using redstone, redstone torches and stone wafers. Not only that there is a new type of way to transport redstone. Don’t use the boring old redstone dust! Use red alloy wire! Made using redstone and silver ingots put in an alloy furnace. Red alloy wire will never lose power and it can be stuck on wall. You can now make different coloured lights according to all the different dies. These lights can be powered with redstone, fun!

Redpower 2 adds a whole bunch of machines to use much like IC2 but used a little differently. Redpower 2 uses pneumatic tubes to transport items in between the machines. Similar to buildcraft pipes but done a little differently; I won’t go into the details. You can craft a whole bunch of machines sorting machines, filters, blutric furnaces (blutric is the electricity of redpower) and even fully fledged computers similar to those in the 80′s! There are also frames, which are pure generous. Frames are blocks that can be moved anywhere with frame motors and can carry any block. You will be amazed at how people can use these. Complicated sorting machines and automatic bases are very popular with redpower. With the mix of machines and redstone you can create some amazing things. The possibilities are endless. 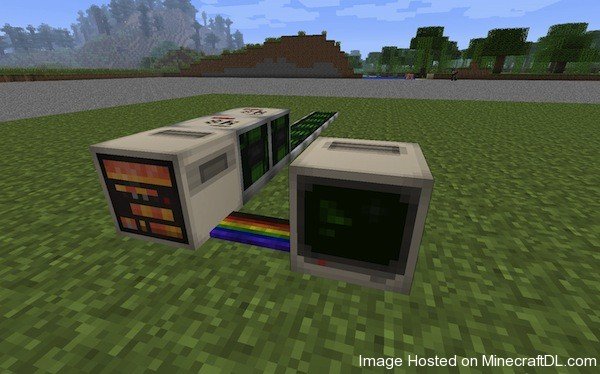 Redpower 2 adds a variety of world generation features too. Mainly new ores to make all of this crazy stuff. Firstly, you may notice the huge trees and giant volcanoes. These are said to have more of a purpose in the future. What Eloraam has done is add in all of the world generation features first and then add in the uses so you don’t have to keep making new worlds to update. New ores that are added are things like emerald, sapphires and rubies. These three can be sued to create tools as normal. They have the same speed as diamond but not as much durability. The gems will have more use in the future. There is also copper, silver, tin and nikolite. These are used to create the various machines and things to make the machines that I will not go into. There is also common blocks such as basalt (found in the volcanoes) and marble (found in caves). They’re just a building material at the moment.

Ones last thing that Redpower 2 adds is some aesthetic features. You can craft things called micro blocks. You can cut a block in half time and time again to get blocks of any size and shape. With these micro blocks you can create very complex structures and even use them to hide your redstone contraptions! The micro blocks have to be one of my favourite features by far!

Over all Redpwoer 2 is one of the most amazing mods I have ever come by and anyone with a creative mind will be able to do a lot of cool stuff with it. Eloraam is a pure genius!

How to Install RedPower 2 Mod for Minecraft 1.2.5