Lore:
The more arcane magics use the life force of objects and creatures. Because of this utilization of the spark of life found in all living creatures, it is considered evil and has been cast out of normal use. However, even though the magic does use this “Life Essence,” it does not mean that every action used with it is inherently evil.Every “Item of Power,” in this case those that have a special function and do not just sit in your inventory and look good, consumes Life Essence, whose unit of measurement is “LP.” Generally, 100LP equals half a heart of the player, so it is a good thing to keep in mind when looking at an item. There is also one more caveat that must be explored, and that is in the nature of “Blood Pacts.” A Pact is formed when you first use an item, and it bonds the item to the player forever. Because of this special bond, every single item that has a player’s signature will drain their toll from that player on use. Fear not, though, because if the player has no Essence to drain from it will instead sap it directly from the user’s health (painful for the more powerful items). This bond between the player and all of its items is referred to as the “Soul Network.”

The only way to utilize the player’s Soul Network is to create your very first item, and that will require a bit of sacrifice. The “Blood Altar” is the answer to these arcane prayers. It is a GUI-less machine with a single internal slot and a tank to hold “Life Essence.” By inserting a correct item into the machine by clicking the altar with it and filling it with the needed Life Essence, the machine will start to transmute the item into another form. To fill the tank with Life Essence initially, though, you will need to make a “Sacrificial Knife.”

When the Altar is working on transmuting an item, it will emit dark red spirals to indicate it is working. However, if the particles turn gray it means that the Altar no longer has any Life Essence in its reserves and the item will slowly loose progress that it has built up. Re-filling the Altar will continue this progress. Right-clicking the air with this knife will nick your finger slightly, draining a heart of health and, if an altar is close enough to you, fill the altar with 200LP. It sucks as a weapon otherwise, so don’t bother bringing it out to a gun fight! The first item of any real value is a Blood Orb, whose main purpose is to charge the player’s Soul Network. To create this item, you will need to place a single diamond into the Blood Altar and fill the altar with 2000LP. Once you get the weak blood orb and bind it to your character, you can either right click with it to syphon a heart from the player, filling up the player’s network with 200 LP, up to a maximum of 5000 for the weak orb. You can also automate this procedure to an extent by throwing a bound Blood Orb into the Blood Altar – it will also take the same amount of health for the given LP, but will work while not on your person. When the orb is being filled in the Altar, light-red particles will be emitted from the Altar to indicate that it is working. The Blood Altar is meant to be upgraded in a very fluid and progressive way. By creating 8 blood runes and placing them in a 3×3 pattern below the altar, the altar gets upgraded to its 2nd tier. This multiblock unlocks several transmutation recipes, and other advantages such as further customization of the Altar. For instance, the 4 edge runes may be replaced with other runes such as the Speed Rune, which increases the speed of all processes by 20% (additive). The efficiency rune lowers the progress that is lost when there is no Life Essence left in the Altar by 20% (multiplicative). These runes, as well as others, will become important later. An emerald plus 5000LP results in an Apprentice Blood Orb, which can fill the player’s network up to 25,000LP. (As a point of interest, the orb’s limits will be increased at a greater rate later on.)

Dagger of Sacrifice
An iron sword, when combined with 3000LP, will give the player the “Dagger of Sacrifice.” This dagger works differently from the Sacrificial Knife by instead being used to sacrifice other entities. What is more, to aid in this sacrificial ritual, if a valid entity is attacked when in close enough proximity of the Altar, the Life Essence will be completely sucked out of them and absorbed by the Altar, killing them instantly. Any child, though, does not have enough quality Life Essence inside of them for a proper ritual, and thus killing them will not give any sort of benefit when around the Altar.Essence per entity (does not work on Player entities):

Sacrificing a Villager will result in the highest amount of Life Essence, but is considered delving into the deeper realms of arcane magic. As such, it will be considered a terrible crime against nature and will result in grave consequences. 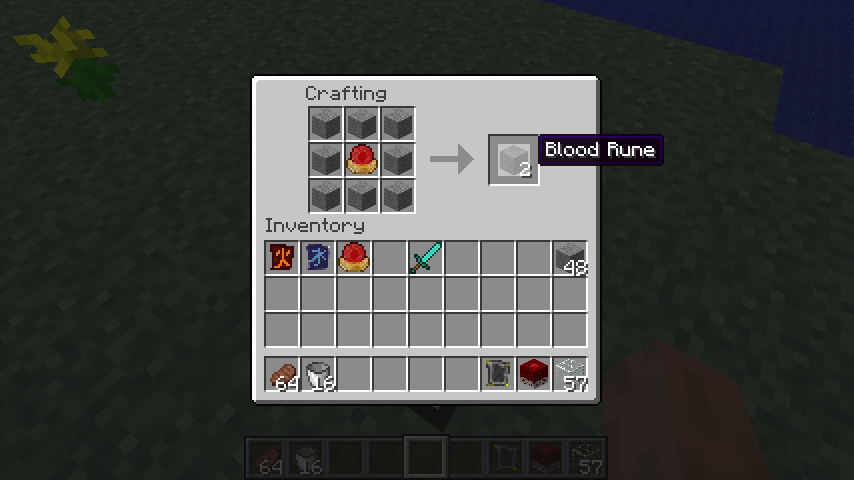 Runes are meant to upgrade and reinforce the Blood Altar and its uses. There are currently only a few of these, but more will be added in the future. The speed rune increases the rate in which all processes of the Altar work at by 20%. This works additively, so it starts at +20%, then +40%, etc. The efficiency rune lowers the progress that is lost when there is no Life Essence left in the Altar by 20% (multiplicative). The Rune of Sacrifice boosts all entity sacrifices by 10% (additively), whereas the Rune of Self-sacrifice will instead increase the yield of rituals that use your own blood. With these runes, you could either focus on sacrificing other animals, or refuse all sacrifices except from your own blood (or both, if you so wish). These also will allow the player to choose to either fill up while they are at their base when they are empty, or opt to do it while they are still out in the field for less efficiency. 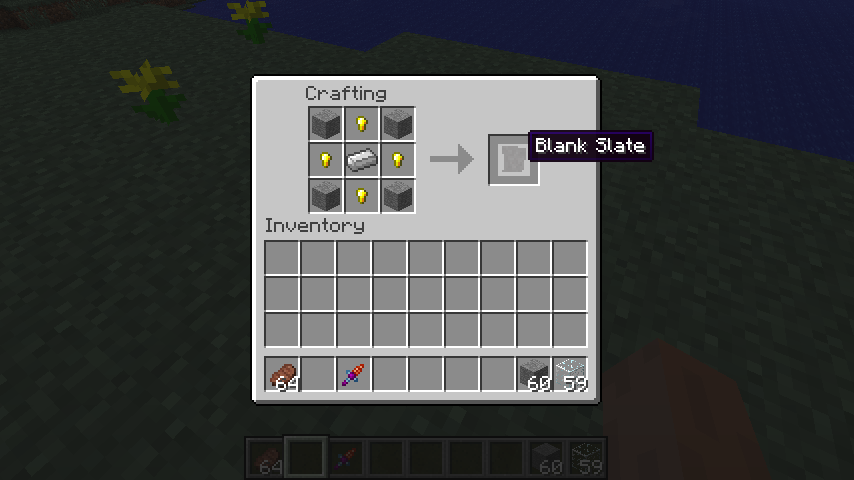 This item converts 100LP into a water source block when clicked, acting as an infinite water bucket. Considering that an infinite source can be easily constructed at this stage of the game, the convenience cost of the item of half a heart is reasonable enough. The second item, the Ying to the Water Sigil’s Yang, is the Lava Sigil. It will create a lava source block at the cost of a grand 1000LP. If you aren’t careful with this, it could end up very bad for the trees – and you, if you don’t have any Life Essence in your network. To make the Lava Sigil, though, you need something called a Lava Crystal. When bound to the player and put inside a furnace’s burn slot, it will smelt whatever is inside of the furnace for a cost of 25LP per smelt. Because it is bound to the player, it should be possible for the player to log off and have the Lava Crystal still work (This is the intended use, though, but will need some testing). If the player doesn’t have any LP left, though, it will apply a Nausea debuff on the player. It won’t kill the player because having to fetch your stuff in a field because you had to log off and thus died would not be fun. The Void Sigil’s purpose is to clean up any form of fluid that is lying around. Right clicking on a source block will syphon away the source for 50LP, but will completely destroy the liquid. This works with any Forge fluid, so use it on that pool of poison to your heart’s content! 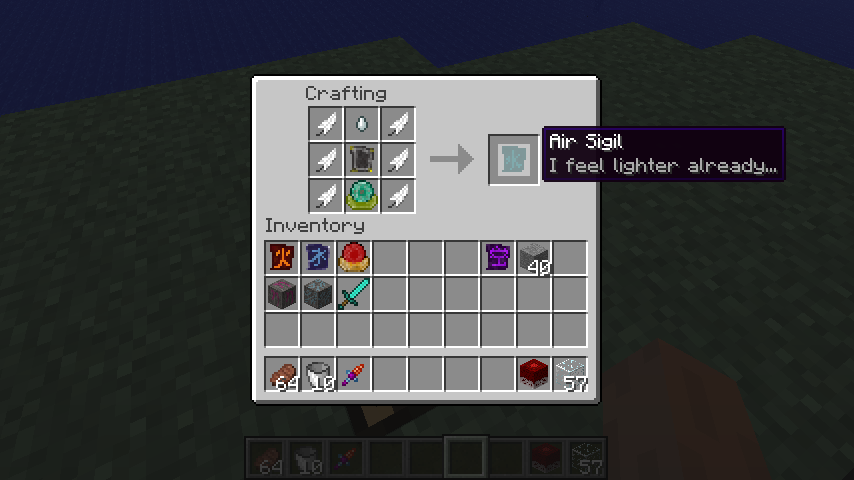 The Air Sigil, when right-clicked, will boost you in the direction that you are facing, even if said direction is in the air. At 50LP per use, this primitive flight will be quite costly, and a weak system will probably fair a travel distance of only about 1000 blocks. Also, it doesn’t remove fall damage, so you better be careful when you are falling down.

Sigil of the Fast Miner The Sigil of the Fast Miner is the first item that has a constant, passive effect. On activation (and every 10 seconds after) it will consume 100LP and cast Haste on the player, which increases the player’s mining speed. More of these “buff Sigils” will come in the future, but they are closer to what I consider the “Clerical” branch of Blood Magic and will be realized fully when that branch is implemented fully.

Have you ever picked up a magic mod for Minecraft, and thought that it was too tame? Was there not enough danger involved when creating your next high-tech gadget? Bored with all of those peaceful animals just staring at you without a care in the world? Well then, I am glad you came here!

Blood Magic is an arcane art that is practiced by mages who attempt to gather a vast amount of power through utilizing a forbidden material: blood. Even though it does grant a huge amount of power, every single action that is performed with this volatile magic can prove deadly. If you are feeling a little squeamish at the prospect of getting overwhelming power at any cost, you do not have to download this mod. You have been warned.