Infernal Mobs Mod randomly imbues spawning Living Things in the World with Diablo-style random Enchantments, making them much harder and much more rewarding to kill. 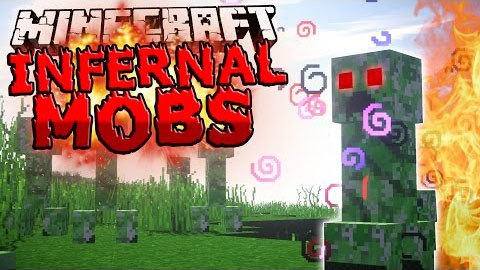 There are three kinds of infernal mobs:

This mod makes Minecraft much more difficult while adding nice rewards. Mobs now have a rare chance of having special effects and increased hit points. It is very rewarding because they have a high chance of dropping diamond equipment.

Bosses can become immensely powerful through the Infernal Mobs mod. Vanilla boss and most bosses added by Hexxit mods are liable to become supercharged. Bosses will gain and use abilities, although they will spawn at their base HP. However, these bosses will regenerate to their multiplied HP if they have 1UP, Regen, or any other kind of healing. Wither HP will hard cap at 300, but Pirate Bosses, Spider Bosses, Necromancers, etc. can become extremely durable.

Replacing the original numbers into higher numbers would up the spawn rates of those with effects.

Note: The loot dropped may be enchantable, and if the loot dropped is enchanted, it usually is enchanted with high level enchantments (i.e. Sharpness III). You can add/remove what is dropped by Infernal mobs by doing the same processes as making a mob infernal but instead change the item ID’s to the items wanted.

How to install Infernal Mobs Mod: