EasyBuilding is a mod intended to take the repetitiveness out of building.

The ghost block is a controllable block that allows you to place the block you currently have in your hand at it’s position. By default the controls the block is moved with your numpad, these are changeable in the control options though.

This means you never have to aim, right-click, move, repeat. You can simply stand in one place and move the ghost block.

The ghost block is enhanced even more by macros. Macros give you the ability to record a sequence of movements and placements and then play that sequence back. Macros are saveable and loadable with this handy UI. 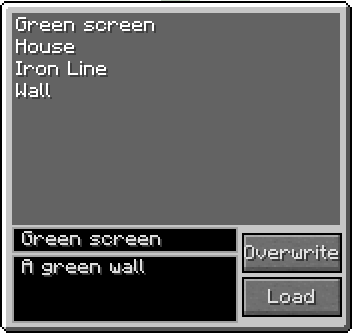 Saved macros are located in your minecraft directory in a folder named macros. (%appdata%\.minecraft\macros).

Thanks to rckymtnrfc for the video!

Aim at the ground like you are placing a normal block and press which ever key is assigned to “Place Ghost”, by default this is Numpad 0.

With the ghost block placed, you can move it in a one block direction anywhere. The defaults for this are

With the ghost block placed, make your current item which ever you want to place and press “Place Block”, by default this is Return

To start recording a macro press the keybind for “Toggle Record”, the default for this is Numpad 7. Then build how you normally would, once you have finished stop recording by pressing “Toggle Record” again.

With the Ghost Block down, press “Play Macro”, default Numpad 9. This will play back the currently loaded macro.

To open the gui press “Load Save Macro”, default Decimal. In the gui there is a list of all the currently saved macros, and below that there is a box for the name of the macro and a box for a macro description. The buttons should be self explanatory.