Slimes used to be a rare mob type that would be the only produces of the valuable source; Slime-ball  Until now, this item has been hard to find and is needed by many redstone workers. However, in the very recent minecraft update of version 1.4.2, slime’s will now spawn in swamps. This makes them obviously easier to find and makes slime-balls much less rare/hard to find. So what happens once all the slime-balls have been used and somewhat useless, sitting in your chests? Luckily a mod has been introduces allowing you to do more with those slime-balls  or encourage you to go out and find some! Using slime-balls you can now make a filling meal for yourself for your own satisfaction. Because bread is just way to mainstream. The jelly cubes mod.

The jelly cubes mod simply allows you to place two slime-balls into a crafting table or inventory crafting gui, and create what is now available as the; Jelly cube. Which of course is a cube of jelly, or slime rather, which can be devoured by the player to regain 3 hunger from each cube. This is simply a handy way of regenerating the health and adding a more unique type of food to your world without changing or adding any unneeded blocks or plants. The cubes can be crafted two separate ways, however both are very similar. The recipe(s) is the following: 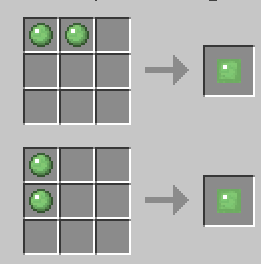 This mod is very simple, however it just gives players a different way of using slime-balls  After all, they only really have 1 or 2 uses in default minecraft and it would be better off having at least one more. Using it as food is an extremely smart idea, and as slime-balls are now a regular occurrence in swamps it gives 1.4 players a reason to go out and hunt slime’s.

How to install Jelly Cubes Mod for Minecraft 1.4.2