Unlike the mod, the X-Ray Texture Pack is basically how the name explains it, , it’s an emerald (and all ores) X-Ray Texture Pack, which you is quite different from all the other X-Ray Textures because of its art style for locating ores and mineshafts, etc. I really like this style because it illuminates the ores from a very fair distance away which is a big plus if you ask me! 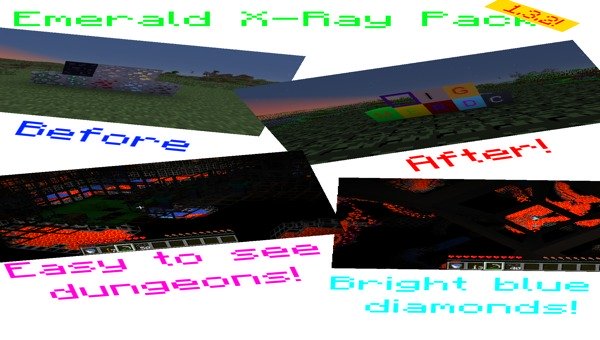 Xray allows the player to see straight through “useless” blocks and view the following:

This texture pack also shows locations of lava, water, spawners, torches, and animals as well as mobs, so you can navigate through your world looking for emeralds and other ores of your desire. Some extra features to this pack are that it’s not only an emerald and ore X-Ray texture pack, it can also find strongholds, abandoned mineshafts, mob spawners, and even more!

To add on this texture pack gives your a strategic boost in Pvp and Anarchy servers by letting you see your opponents and enemies from a fair distance away (depends on what render distance you have on) and also allowing you to get supplies and tools very quickly. You can also use this texture to locate other peoples bases, mines, etc

A word to the wise, however: while this texture doesn’t report itself to the server, it is still visually detectable through other means. Most admins on Minecraft servers are capable of discovering this method of  cheating visually. They may spot you digging unlit holes straight to diamond veins.

How To Install The Emerald X-Ray Texture Pack